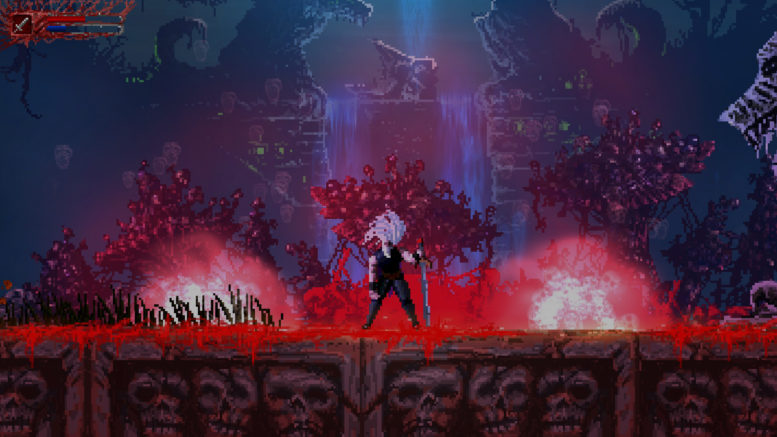 Seldom do we come across people who have not been victims of the addiction of playing video games. From childhood to teenage to adulthood, most of the tech-savvy generation has spent hours cooped up in their room, totally oblivious to the world around them. When you play a video game, you totally lose track of time and your only goal is to secure maximum points and reach the highest level. Today we will present to you the review of such a fantastic video game, a game that can easily take your gaming experiences on the PC to the next level. The developers of the game, Wolf Brew had to go through a number of minor obstacles when the initial release of the game was forestalled due to unavoidable circumstances. But then, it was ultimately released and Slain: Back from hell became one of the most loved video games that you will come across.

It is one of those games that will manage to grab your attention and make you sit through it. The game is unique and is a 2D hack-and-slash which is highly inspired by heavy metal. The names that are used in the game are pretty outlandish, for example, names that you will only come across in a Robert Jordan or even a David Eddings novel. The game is characterized by some of the most beautiful pixelated graphics as well as art designs that you have seen in any other video game. On top of that, Slain: Back from the hell has a highly nostalgic fantasy narrative. However, the best part about the game is that it does not depend on these above-mentioned tools and aesthetic tools in order to please the audience and to increase the number of takers. The gameplay is something which is very notable, modern and has high speed. However, there is a slight tinge of old-school challenge that is probably trying to revive itself in the community of video games.

The game is strongly remarkable not only because of its metal aesthetics but also because of the very detailed backgrounds that we will see once we start playing the game. Each of the areas that feature in the game is marked by a significant amount of depth and it will give you the impression that you are making your way through a totally realized world. The enemies of the game are quite a few, for example, the fragile and sluggish skeletons, the insectoid demons that will arrive at the forefront to scythe or cut you into two halves. Also, other enemies constitute the wolf statues that are animated in nature, the beholders who will hurl gaseous bubbles to name a few. The enemies that you encounter towards the end of the game can be regarded as detailed monstrosities and huge in size as well. Also, a very interesting aspect regarding the enemies is that every boss enemy has the same design as the as they area in which you will find them. The combat mechanics that are used in this game are of the superlative quality, perhaps the best that you will find in any video game. The mechanics are characterized by attacks that are chargeable in nature, dodging the moves, blocking along with aerial attacks as well as magic missiles. The magic missiles should be used wisely because of a limited mana meter. Also, there is a very important parry mechanic which will enable you to land critical attacks on enemies, considering the fact that you are able to time your block in the perfect manner. You may think that this is not a new concept, but what matters here is the execution. This technique is executed so well that there is a big thud of heavy steel on top of the demonic flesh.

The gameplay of Slain: Back from hell will need you to slam the square button and you have to keep on doing that until the enemies in your way are all perished. There is, however, no nuance in the combat in spite of the fact that there is a huge amount of mechanics available which will help things to spice up. Apart from your sword swings, you will have a charged sword attack which has the potential of dealing with more damage. It is basically a mana system that will enable you to cast regular as well as charged spells. Also, you can block, parry and dash in the backward direction in order to avoid the attacks. There is supposed to be some amount of depth in the combat of Slain, so it is kind of disappointing that maximum of the enemy encounters that you will face will need to get the hit first and then stun followed by mashing square till their death. 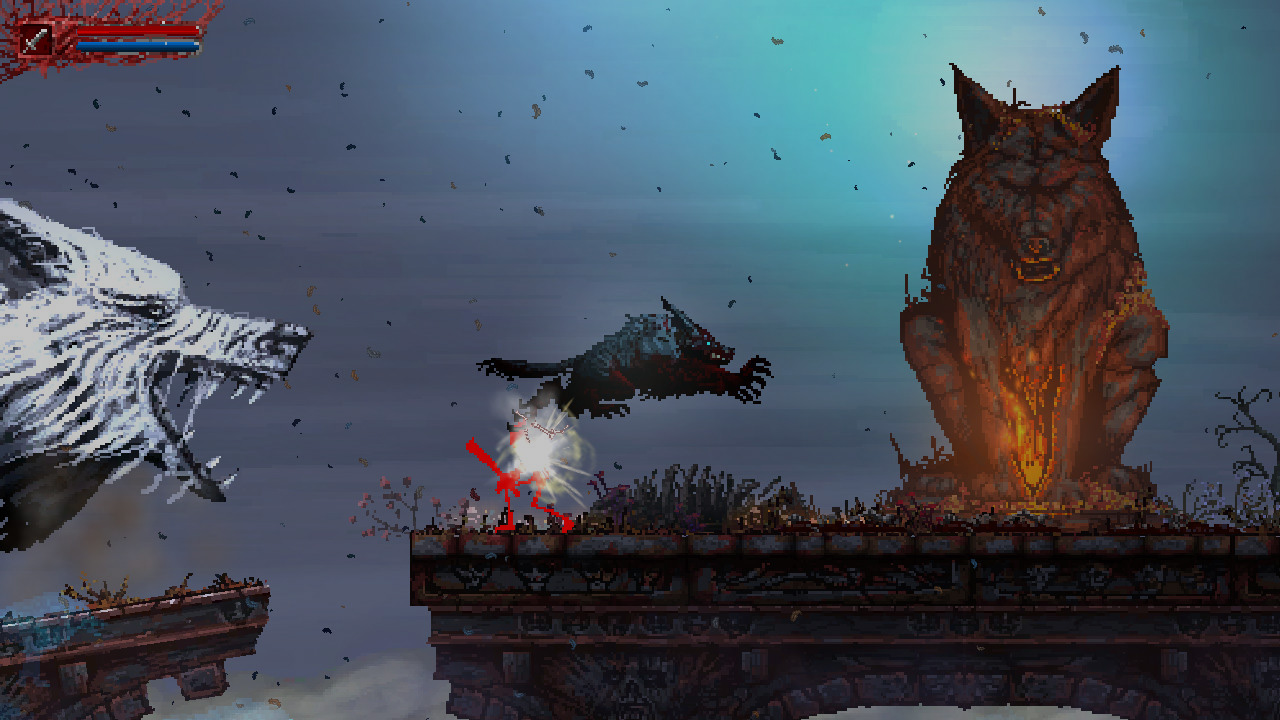 Slain: Back from Hell screenshot

There would be very rare occasions when you will have to use a few spells in order to defend yourself against the long-range enemies. At that time, you may chance upon stronger enemies whom you have to block and parry. But, these encounters will slowly become more frustrating as they will demand you to be frame perfect otherwise you have to still take the damage. It will slowly become redundant when you try to block the enemy’s attacks since you still have to take the damage quite often, which is actually not worth it as health is scarce. Certain enemies also have slightly unbalanced strength because some of the stronger enemies take a longer period of time as well as more hits in order to defeat the boss battles. The boss battles are usually over after the button is bashed for a few seconds.

DIFFICULTY WHICH CAN BE A CHALLENGE

The other part of Slain: Back from Hell’s gameplay is platforming and it functions pretty well for most of the part in spite of being a bit of basic. While playing the game, you have to jump over the spikes as well as across moving platforms. But this should actually be the standard fare, especially for someone who has prior experience of taking part in this genre. At this point of the game, it will become a bit difficult for you. One of the biggest problems that you will face while playing Slain: Back for hell is that you have to encounter the highly difficult spikes. Unlike from the series of Dark Souls, where you get to learn after a death takes place, you will face cheap ways that will chip down your health in this game. Without any rhyme or even reason, enemies will spawn out randomly out of the most unexpected places. Thus you will be very likely to come across four to five projectiles apart from the airborne enemies which will be flying across the screen at once. Therefore, it will not be possible for you at all to not take some kind of damage. This level of difficulty of the game could have been still bearable if you were constantly getting checkpoints from the game, but there are chances that you might have to cross quite a lot of levels without coming across any checkpoint. Naturally, the matter becomes very irritating when you have no option other than slogging your way through an extremely tough section, that too with only a remnant of a sliver of health. In such a situation, a spell-casting skeleton might appear from nowhere and consequently pick you off, thus reducing all your hard work till this point to nothing.

The music of the game is something that is worth mentioning. If you are a fan of death metal, you will love the soundtrack of the game. Many people associate tiresome, long guitar tracks with metal music. But in this game, you will come across sophisticated compositions which modulate themselves according to the situation. The music is dependent on a number of factors like whether you are fighting or not, which area you are in currently and so on.

The game is very clearly designed in such a manner that it provides a challenge. It has a trophy which is given for dying 100 times and it is something that you might want to see appearing sometime in the third or even the fourth level. Therefore, it is very natural on your part to feel that you are being punished all the time and are not getting enough achievements or succeeding. If you die for about a dozen times on a single level, it becomes very frustrating as well as repetitive. It will give you a feeling that you have been slamming your head against a brick wall for five hours.

This game, Slain: Back from hell provides perhaps one of the best partnerships of great visuals along with spellbinding audio. The level of difficulty of the game that is the only drawback, which causes it to seldom pick up the amount of momentum it should have. Play this game to discover the fun of video games!

Be the first to comment on "THE REVIEW OF SLAIN: BACK FROM HELL"